skip to main | skip to sidebar

Had another bad fuel leak develop on the engine - the vibrations seem to have work hardened then split one of the original nylon pipes.

I've now replaced it with decent fuel grade rubber flexi-hose, but not before losing quite a bit of diesel, hence the current overall MPG figure being pretty abysmal.

I *think* its not got any leaks now, so hopefully the next lot of figures should improve matters (yes, I know, eternal optimist n'that...)
Posted by estwdjhn at 15:15 No comments:

One nation under CCTV? 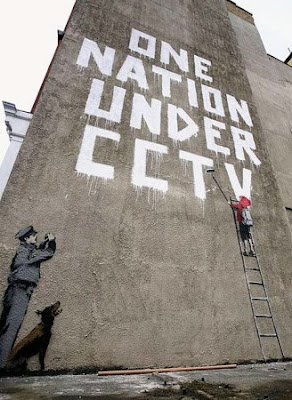 So much for CCTV. Came back to Bitsa in Tesco's carpark the other day to find a massive dent in the 'new' passenger wing, clear evidence that some moron couldn't park, and had then legged it.
Went to see if they had CCTV footage... of course not. (I wouldn't care, were it not for the fact that 1) it was about the only decent panel on the truck and 2)the perpetrator did a runner. Had they had the decency to leave me a note, I've not have wanted to take it further).

I forget how many times I'm apparently watched by CCTV every day, but it seems that the two times I've wanted the footage (in both cases, incidents in areas where there are lots of cameras) it doesn't exist. Talk about heads you lose, tails you don't win...

(Image is of course Banksy... google if you don't know who he is)
Posted by estwdjhn at 22:36 No comments:

... because, frankly, there has been little to report, other than lots more miles.

Only new development has been fitment of a CB (obtained for free) in an install that is as invisible as possible while still having a fighting chance of working.

I've also acquired a full SIII clutch system, to fit in place of the current arrangement (leaky master cylinder, length of brake pipe, flying joint to a flexi pipe, IIA slave cylinder on a SIII box). The idea is that then it won't leak its way through a tub of fluid a week, and as a bonus it will look a little tidier under the bonnet. Just got to find the time to fit it.

Most of the fun this week has been with my new Series 1, but as that's a project that's going in LRM, I'm not planning on bloging about it much. (Get down to WH Smiths, and read their copy, you tight beggars).
Posted by estwdjhn at 18:27 No comments:

Well, had a good time at the weekend, all being considered.

I did a fair bit of laning, not all as driver - quite a lot was as "ClimbingChris's" passenger.

Main disaster of the weekend was the fuel supply banjo union on the injector pump getting yanked undone on a bump, and by the time I found out 1/2 a tank of diesel had landed on the road, in about 20 miles. (expect the fuel figures to be abysmal next time I fill the tank)

I've also found one cause of the poor general MPG I was getting - a split fuel return line from the injector pump... lets see if it improves now.

Posted by estwdjhn at 14:57 No comments:

Few jobs done, nearly ready for another run to Wales

Off on Thursday night to Wales with OLLR - camping trip to Shell Island.

This in mind, I've done a few little jobs today;

Changed the wheel studs on one rear hub, as the originals were worn, and I was having problems with some wheel-nuts self un-doing. Looks like I've a slight weep from the hub seal, I've left it alone for the minute, as I'd no spare hub seal, and that axle is coming off shortly for rebuilding with a 3.54 diff - its just waiting on me borrowing another 109" Salisbury to run as a slave axle in the short term - hopefully I'll pick that up in a week or two.

I've also replaced the "red" lever in the cab - it quite literally fell off last week, the bolt holding it to the gearbox having vanished. The new ones were a pig to get at to put in too - I could have really done with a ratchet spanner, but of course the 13mm ratchet spanner vanishes when its really needed.

The final, and most time consuming job was sorting out the contents of the rear tub. Yes, the broken glass/oil/mud sludge was scraped out, and sifted for valuables... I found various things I've been looking for for a little while, including my best 10mm impact socket (pretty essential for working on a tdi), and a beer bottle that must have been in there since EOD 09.

I've also swapped some wheels round again, she's now running on a Avon Ranger's or near copies all round, but I'm a bit concerned by the cracks in some of them - I think I may buy two of the Kingpin copies, put them on the front, and put the best two of the rest on the back.
Posted by estwdjhn at 00:19 No comments:

Just been and re-adjusted the brakes, stops even better now - pedal has risen a good bit too.

Still very impressed with the mintex shoes - it really does stop properly now.

In other news, I'm currently shopping for a S1 109" or 107" - if you know of one sat in a hedge rusting away, please let me know. Condition not too critical - I'm up for a lot of welding. Currently two on eBay - one has a new chassis, but is out of my price range, other is very rusty, but under serious consideration...
Posted by estwdjhn at 16:08 1 comment:

estwdjhn
Stockport, United Kingdom
I'm a guy who when is isn't working, spends most of his time and hard earned cash on running ratty old Landies... mad or what.