skip to main | skip to sidebar

Bit of a boring post really, but just to say the current free host I use for hosting the various wiggets like the MPG calculator has announced its closing, so I've had to get an account elsewhere, and move all the stuff across. The snag is that as I'd not registered a domain name to move with the stuff, there are bound to be links and images in older posts that I've broken... If one annoys you, let me know, and I'll fix it.
Posted by estwdjhn at 07:57 No comments:

Under two weeks ago, I presented my MOT man with a Landrover that worked perfectly in almost every respect. The brakes worked, the clutch worked, the headlights worked etc...

Its amazing what can happen in two weeks. First off, the alternator has caused a disaster. Or rather its bracket did. Followers of this saga may recall that a few weeks ago, I came to grief on a mission of mercy when my home-made alternator bracket let go on the A500, and left me with no electrical system or fan belt. I welded the bracket back together, made a mental note to fix it properly, and that was that.

Of course, that wasn't that... not at all. The re-welded bracket wasn't quite square, and so it took to eating fan belts. Then, as I was heading home from church yesterday, I saw the dreaded dash light illuminate once more, and on popping the bonnet found that one of the bolts that held the bracket to the bock had sheared off, allowing the alternator a more than free range of movement.

Have seen on Luke's fantastic 80" Tdi conversion (if you haven't met this vehicle, keep your eye on LRM - I have reason to think it may feature in the next couple of months... and it was great fun getting to test drive it for review.), a much neater way of making up a bracket, the fitter at work and I spent a happy evening tonight sorting it out.

Apart from needing a longer fan belt (much to my frustration, I had to buy one from Halfrauds, as they are about the only people selling fan belts at 7.30pm), it was dead easy to make, and works a treat - I'll post some photos up once I've taken them... (typically, I didn't have a camera to hand when doing then job).

Of course, fixing one thing merely provokes another, and I now have issues with a leaking clutch hydraulics. Don't know what's leaking yet - will have to look tomorrow lunchtime.
Posted by estwdjhn at 22:55 No comments:

Now with a nice new MOT 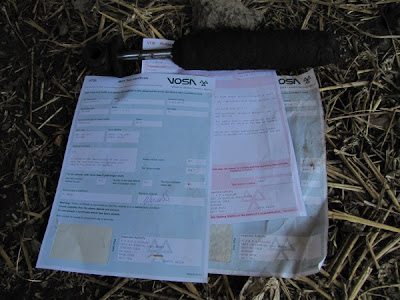 Took it in this morning, failed on a bad earth on a headlight (it was working fine when I checked it in the yard) a cut on one of the tyres and a leaking damper on one of the rear springs...

Wizz'd down to Landranger, and purchased another shocker, made a new headlamp earth, swapped some tyre round and returned it, now have a nice green bit of paper that doesn't expire till May 8th, 2011...
Posted by estwdjhn at 14:59 No comments:

Spent tonight trying to sort out some of the last few jobs before the MOT.

I've now a full set of working indicators, both headlights work on full beam, and I've a power feed to the horn when I press the switch(looks like the horn itself has died, I'll buy another one tomorrow), and the numberplate light works(It did till I tried to clean the lense tonight, when it promptly cut out - some cleaning of the connections)

I've also tweaked the handrbrake, as it was a tad short of reseve travel.

Still to do is:

-Change the bottom shock bushes all round (any idea why they have gone SO fast? I fitted new ones last year on the front, and there is nothing left of them).

-Fit and wire some screenwashers (already bought a pump, just need some pipe and a suitable small pop bottle as a res).

-Fit a passenger windscreen wiper (randomly fell of and vanished in high winds/pouring rain, while rattling out of buxton on night a couple of weeks ago)

-Fit some more bolts in the front prop (not an MOT fail, but someone thats needed doing for a while)

-Remove the tow hitch, as its bent

-Fix the exhaust, cos its fallen off (again).

And then progress to an MOT testing station, to hear the worst. Getting quite excited about the thought of actually getting two MOT's in succession on a vehicle. A new MOT may quieten down the regualar catcalls from just about everyone about the fact it looks a shed for as much as a week as well...
Posted by estwdjhn at 21:00 No comments:

A quick couple of photos from Saturday.

The bomb hole in the second photo seems to be a new arrival - there didn't used to be one there.

Its now been filled with a LOT of stone - time will till if this repair lasts...
Posted by estwdjhn at 21:48 No comments:

Offically summer now - roof is off, for the first time this year. Just hope the weather lasts.

Off to Wales in about 3 mins.
Posted by estwdjhn at 19:21 No comments:

Bitsa an I will be headed down to Wales tonight, all being well.

Didn't take Bitsa to Llandovery in the end, traveled with 'Stig' in Dougal instead. Straight six Nissan diesel power is quite an experience, particularly when 'Stig' is out to prove that as well as being "gr8 for driftin", Dougal will actually go round bends better than BWM.

Once in Llandovery, it was a pretty quick job to get the cam belt on, and the 80" fixed. Hopfully the owner will be investing in an 'AA' card.
Posted by estwdjhn at 14:53 No comments:

Got to Stoke on my way to Wales, only to have the alternator bracket snap in two, ditching the alternator, and a good bit of my electric system with it onto the floor.

While trying to find the breakdown recovery number, the Coppers rolled up to inform me I had 30 mins, and then they would be recovering me, at vast expense. Sorted out an wire from the battery to the engine run lead, then bumped her, and with said coppers following at close range got her off the A500 and onto a layby out of the way.

Got recovery to drop me off at the farm (midnight by the time that happened), then repaired the bracket, fitted another alternator, and bodged the electrics by the light of my phone (torch having vanished in the general medley).

Just got back at the boat for some kip, then will be on my way to Wales in the morning.
Posted by estwdjhn at 02:53 No comments:

Your truly is on a mission of mercy tonight - 150 mile's down to Wales with a tdi cam belt and some push-rods, to rescue a 80" with a broken timing belt... just been stripping a sherpa 2.5na for some pushrods, will be on the road shortly after 7.30pm.

Updates, and possibly pictures to follow.
Posted by estwdjhn at 16:45 No comments:

Well, new front cylinders and shoes are now on, and it seems to stop. Its not surprising that the back was out-braking the front before - one side was fluid contaminated, and the other side had a seized wheel cylinder. (I knew about the leak - that was why I was fixing stuff, the seized cylinder was news to me however).

A certain amount of fun was had getting the peddle off the floor, but eventually it was done, mostly by adjusting up the back.

A test run seems to suggest they are pretty much balanced, and the 60mph test saw a successful very rapid stop in a cloud of tyre smoke...

Mintex shoes are the future - stops better with them on 4 cyl brakes than it used to with the 6 cyl setup when that was spot on.
Posted by estwdjhn at 19:10 No comments:

Brake stuff from Paddock's turned up this morning. Hopefully will get it fitted over Easter, as I've the long run to my parents and back at the end of next week... (also chasing a couple of potential stories for LRM).

In other news, the alternator has finally stopped glimering a little(had been for month, for no apparent reason), and now holds the charge light on all the time, so I've declared it knackered... I'm hoping a mate's grabbing me one off a breaker, as I'm a bit too skint to want to buy a new one.
Posted by estwdjhn at 17:38 No comments:

estwdjhn
Stockport, United Kingdom
I'm a guy who when is isn't working, spends most of his time and hard earned cash on running ratty old Landies... mad or what.